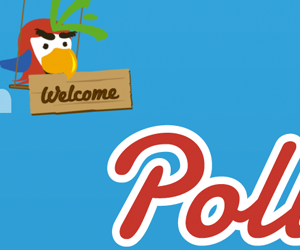 The idea for Poll.li originated during a December housewarming party for my friends Karl and Audrey.

After things warmed up, someone started ranting about how they wanted a hate button. “Liking sucks! I want to let the world know that something is crap.” This was quickly identified as a brilliant. “Why are we forced to be so damn positive all the time?” “Lame Button! Lame button!”, people cheered.

Being the only one present who worked on software, I quickly promised to liberate these people. “You’ll have your lame button!”, I slurred. Someone shouted that it should be called Hatebook. We poured more scotch, teased Kaudrey’s devil cat, and eventually went home.

The next day I drank water and excitedly introduced my Grio colleagues to Hatebook. Grio’s resident skeptics quickly made me realize that the Hatebook was a terrible idea. First of all, others had built something identical (various incarnations of a dislike button exist), and the domain hatebook.com was already taken. More importantly, a project focused on giving users the power to hate things is negative and sounds like a drag to work on. Negativity might be fun to rave about on occasion, but long term it’s unattractive. Everyone hated hatebook.

Still, there was something besides booze driving this desire to stamp emotions. After much lobbying, even the most crotchety among us agreed that it might be worthwhile to explore the concept further.

Here is how the idea developed:

The online version of the San Francisco Chronicle (sfgate.com) is pretty cool. The site includes a simple feature whereby user-generated article comments can receive up or down votes from other users. This spawns competition to leave the wittiest comment, making for exceptionally entertaining reading. While great comments would certainly be written without the voting system, there can be no doubt that rewarding/punishing commenters with a ranking system helps to drive commenting and readership.

We also thought about the success of the like button and similar widgets. Obviously, people like this single-click voting stuff and it adds color to a page. However, everyone agreed with main source of discontent I saw at K&A’s party – allowing only positive votes feels too limiting.

Over the next few days, we IM’ed ideas about hatebook back and forth across the office. After some time of staring at our own messages it dawned on us that we were sending a lot of emoticons. They’re pretty cute when you take a step back, and nothing does a better job of digitally relaying a mood. At some point it dawned on us that emoticons were a natural fit for the Hatebook idea.

Ultimately, we decided to merge emoticons and voting. While this might not be a unique idea, searching didn’t turn up a ton of results and we thought there might be room for a contribution.

We decided on the name Poll.li, partially because the widget is used for polling but also because parrots are pretty cool birds.

What is wrong with us that we actually spent time working on this goofy thing?

We’ve been in the software services business for a while, and wanted to take a shot at building our own products. We figured that playing the role of product manager and business stakeholder would give us additional perspective that could be helpful in providing services. It was also an opportunity to run wild with design, to have fun, and to play with some new technologies like Amazon’s DynamoDB.

We hope you enjoy Poll.li, tell your friends, and maybe even incorporate it into your site. We’re all ears when it comes to suggestions and feature ideas! Just email us at feedback@poll.li.

Huge thanks to Alberto and Yui for their patience with a first-time product manager!

P.S. you can see Poll.li in action right after this article – feel free to use the :| face, my favorite :)