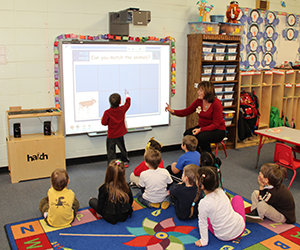 Looking into a classroom today, things might not look much different than they did 10+ years ago. But if you take a closer look, amongst the books and desks, there are computers, smart boards, and iPads. Technology has always had an influence on education, and in the digital age of today, modern tech companies and education institutions are working together to build effective learning tools.

Over time, as technology has advanced and new inventions have emerged, schools have adapted their means of educating by incorporating the latest technologies. As early as the 1920’s, radios were used to broadcast lessons. Then, film and television made their way into classrooms, headphones allowed for language labs and whiteboards started replacing chalkboards. By the late 1980’s, computers were common in schools throughout the country. Currently, over 1.5 million iPads are being used in educational or school settings.

According to the National Center for Education Statistics, in 1995 there were less then 1/2 million computers with internet access in all public schools. By 2008, only 13 years later, that number had increased 30x, bringing the total number of computers to over 15 million. In today’s classrooms, technology has an even greater presence as teachers are utilizing websites and apps in their lesson plans. As of March 2015, 77% of teachers use internet for instruction. Available resources vary in subject, skill level and ease of use. Some examples of technology being used in public elementary schools today are:

Starfall is a free website for preschool age students to learn letters, sounds, colors, play games and listen to songs.

Activinspire is one product available through Promethean Planet that allows teachers to create interactive lessons plans or find existing ones.

Using such products help motivate students and keep them engaged. Of course, not all students respond the same to one teaching method. For students that have special needs, there programs that help with communication. In an extreme, but not uncommon case, apps such as Proloquo2go, can be used on an iPod and allows otherwise nonverbal students to communicate with their peers, teachers and other individuals they might interact with on a daily basis.

Not only is technology changing education, but the relationship has a reverse effect as well. Schools are a major consumer of ed-tech products. In 2014, K-12 schools invested about $642 million in ed-tech products and even more the following year. Ed-tech companies are also receiving increasing amounts of money from investors. According to Apple’s website,  there are over 80,000 educational apps in the App Store. With so many to choose from, how do teachers narrow down their options? There are websites such as Common Sense Media that rate and provide reviews on educational tools, including websites and iPad apps, to help educators and parents select appropriate teaching material.

However, there is a disconnect between the developers and companies that build these applications, and the schools and individuals that use them. When building software that is to be used in public schools, by young children especially, there are additional factors to consider. The Office of Educational Technology has created a document that addresses these issues.

Multiple accounts. It’s common for iPad apps to require login and usually one user per device is logged in at a time, but when the device is being shared by multiple students, it’s necessary to be able to easily and quickly switch between more than one user.

Accessibility. Technologies used in public schools need to be usable by all students, even those with disabilities.

As you can see, technology in education has come a long way and continues to evolve. With the the advancement of new technologies such as Virtual Reality (VR) and Augmented Reality (AR), things are sure to get more interesting in the classroom.