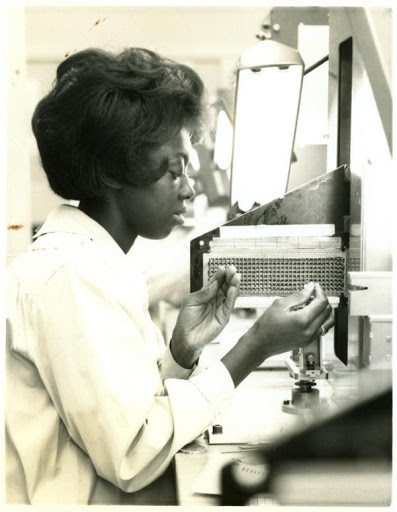 It may seem strange to bring up textiles when discussing computer programming. However, my interest in the correlation between the two was piqued last week when my friend sent me a question currently circulating on the internet: Is it possible to knit DOOM? Thinking about this question led me to consider the immense influence that the textile industry has had on computer science and modern technology.

Can I Knit DOOM?

DOOM was a first-person shooter video game that came out in 1993. It was revolutionary within the video game industry because it was one of the first games to introduce the first-person shooter to mainstream gaming, it introduced death matches, and it improved graphics far beyond the typical patches of light and dark to make gameplay a more immersive experience. DOOM is now also known for being ported to every possible device, no matter how ludicrous. For example, DOOM has been ported to digital cameras, transit card readers, and cars. 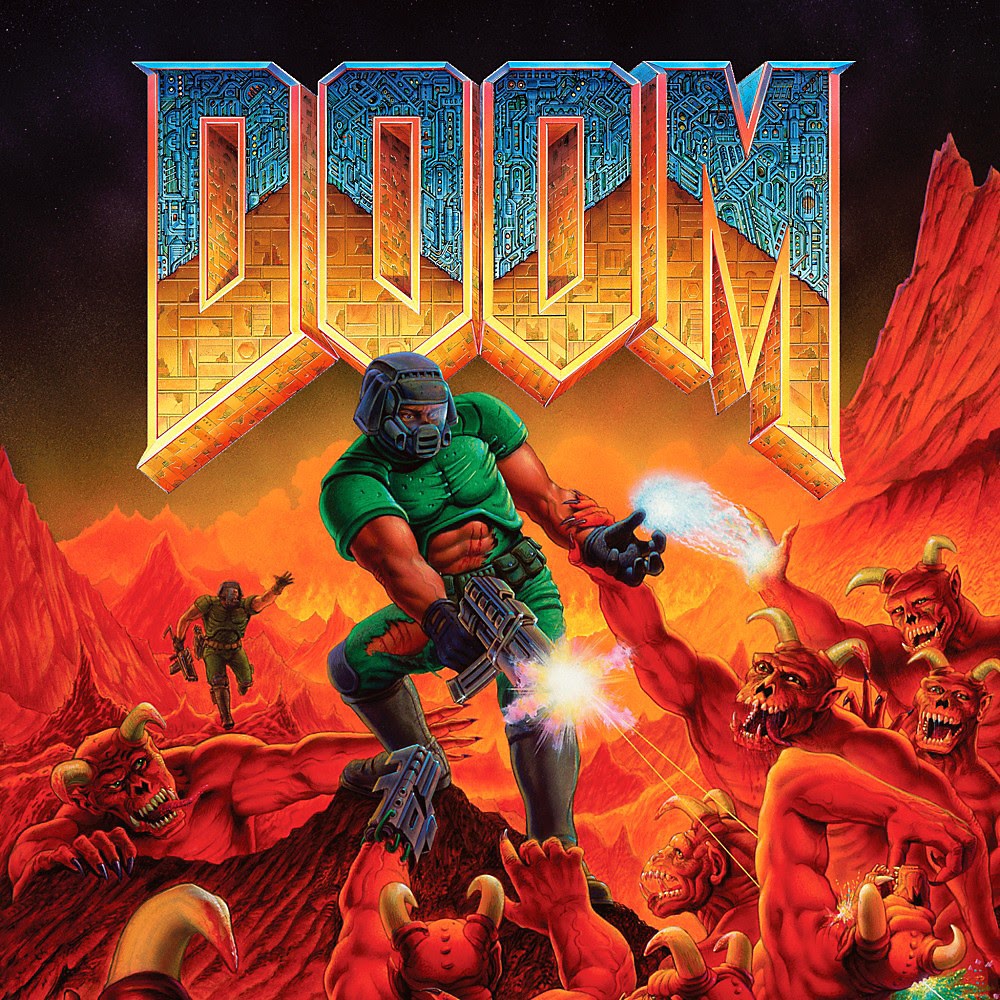 Surprisingly, the answer to my friend’s question is, “Yes, of course you can knit DOOM.” At its base level, DOOM is just a large collection of binary code. Therefore, by knitting the 1’s and purling the 0’s, you could knit a physical representation of the game.

Doom is a relatively small video game at only around 2.3 megabytes (MB). If you calculate this into bits, assuming one bit is the equivalent of one binary instance, DOOM is around 1.912 x 107 bits. Completing 19 million stitches is ambitious, but by no means impossible. After all, we certainly have the time while in quarantine.

Compared to modern video games, DOOM is quite small. For example, Red Dead Redemption 2 is 99 gigabytes (GB), which is the equivalent of about 39,000 DOOMs. We are able to make these large scale games today because memory is cheap and small. However, we didn’t always have this luxury. Back in the day, before DOOM was even an idea, computer programs were created and stored on hand-made punch cards.

Punch card programming uses hole-punches to represent binary digits. As you can see on the card below, 1’s are represented by hole-punches, while 0’s are un-punched.

Punch card programming began as early as the 1880s, and continued through as late as the 1980s. It was used for containing programs, loading in instructions, and holding or transferring data.

But what was the inspiration for punch card programming? To answer this question, we have to go back to 1720s France.

Rise of the Textile Punch Card

Basile Bouchon was a silk weaver in Lyon, the silk center of France, in the early 1700s. When he began working as a silk weaver, the weaving process was time-consuming and tedious. It required a weaver to weave the thread and multiple assistants to lift and lower the heddles, and the risk of mistakes was high.

Bouchon’s father was an organ maker, and had shown Bouchon the paper reels that were used within a player piano. Bouchon gained inspiration from the player piano’s design, and began to use perforated paper tape with punched holes to raise and lower the heddles on the loom in a consistent pattern. While it still required a heddler to assist in the process, it drastically lowered the chances of mistakes and partially automated the process.

Joseph Marie Jacquard, a fellow weaver in Lyon, successfully expanded on Bouchon’s automation in 1804. Jacquard replaced paper tape with sturdier punch cards, and placed his punch cards in chains that could be spread across a warp, or across the loom and looped. The holes in the punch cards dictated the pattern that would be woven.

These advancements allowed the weave pattern to be switched at predictable intervals, thus making looms programmable. Jacquard’s new program also eliminated the need for assistants, which allowed the loom to be run by a single individual. This mechanism became known as the Jacquard Machine, and quickly expanded around the world.  Fabric woven on a Jacquard Machine allowed weavers to create complex patterns far faster and with less labor than what could be created by hand, which made these high quality textiles accessible to everyday people. 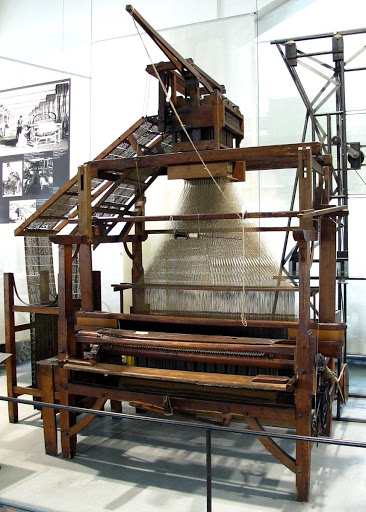 From Looms to Engines

Charles Babbage was an English mathematician who dedicated the later part of his life to inventing calculating machines. His first attempt, the Difference Engine, was created to calculate logarithmic tables and polynomial functions with speed and accuracy greater than humans. However, metalworking techniques at the time were not advanced enough to make the parts required economically or precisely, so funding stalled and the Difference Engine was not brought to fruition.

In the wake of the demise of the Difference Engine, Babbage began work on a much more expansive design, called the Analytical Engine. Inspired by the Jacquard Machine being used in the textile industry, Babbage intended to use punch cards for inputs and outputs just like the looms did. However, just like the Difference Machine, the Analytical Machine was never completely built.

In 1842, a description of the Analytical Engine was published by Luigi Federico Menabrea, based on a lecture given by Babbage. The next year, the article was translated into English and annotated by Ada Lovelace, an English mathematician. Within her annotations, Lovelace included an algorithm for calculating Bernoulli numbers using the machine. This algorithm, though never tested because the machine was never built, is considered by many to be the world’s first computer program.

Punching in the 1890 Census

In the 1880s, Herman Hollerith, an MIT professor, decided he wanted to develop an electronic tabulating system. Like many other great mathematicians before him, Hollerith turned to punch cards for his solution.

As part of his doctorate thesis, Hollerith determined that if he designed space for certain data, it could be sorted electromagnetically by the presence or absence of a hole. This technology could be used to quickly and perfectly tabulate all kinds of data. His electronic tabulation system received a patent in 1889.

In 1890, the U.S. census was completed using Hollerith’s electronic tabulation system. Hollerith’s system, along with several other factors, served to lower the time required to process the census from eight years (1880 census) to six years. Hollerith’s technology was also leased to other countries to do their censuses, and to businesses to manage records.

In 1891, Hollerith founded the Tabulating Machine Company, which later merged with several other technological businesses to become the Computing Tabulating-Recording Company, which eventually became IBM. In the following decades, IBM went on to create floppy discs, ATMS, magnetic stripe cards, SQL, and many of the other technological marvels we use on a daily basis.

Jacquard, the true father of many of our inventions, goes largely without recognition in most history books. However, some, including Lovelace, understand the profound effect his invention had on the technological world. Lovelace included a tribute to Jacquard within her annotations that read: “We may say most aptly that the Analytical Engine weaves algebraical patterns just as the Jacquard loom weaves flowers and leaves.”

One Small Step for Textiles

For the United States to get to the moon, Apollo 11 needed computers to steer the ship. The computers needed to have the power to operate the ship, while remaining lightweight to minimize the amount of rocket fuel required.

At the time, the best memory system was core rope memory, a technical innovation in the 1960s. Core rope memory is made by massing voltage through dozens of wires threaded through tiny magnets. However, to make the computer small enough for the spaceship, the cores were so small and the wires were so thin that automation was not precise enough and caused too many errors. Therefore, the cores had to be hand-threaded. Who would have the fine motor skills required for such fine threading?

A woman hand-weaves the Apollo Guidance Computer. Image from the Transistor Museum.

The final Apollo Guidance Computer was 70 pounds, approximately 1 cubic foot, and contained 4.1 KB of RAM and 73.7 KB of ROM (for reference, 1 DOOM is approximately 37.3 Apollo Guidance Computers). The computer contained six core rope modules, each of which contained 512 core ropes. Each module took 8 weeks and $15,000 to assemble. Precision on the part of the code writers was key because the modules were not editable once they were made, making code patches impossible.

The creation of the Apollo Guidance Computer was not the textile industry’s only contribution to the Apollo 11 mission. The spacesuits for the astronauts were also made by Playtex.

When the spacesuits were initially being developed by the contracted companies, the suits were too bulky and the helmets unsealed and popped off at inconvenient times (not a great flaw to have in space). The Playtex Company, also known as the International Latex Corporation (ILC), invented a suit that they believed would work, and convinced the overseers to allow them into a competition with the contracted companies for the official suit design. Playtex won the competition, with a suit that was easy to use, far more flexible, and very safe.

As a result, a handful of seamstresses usually focused on underwear were instead given the important task of hand-sewing the Apollo 11 spacesuits. The suits were made of 21 ultra-thin layers of various materials, such as rubber, latex, and coated glass, all designed to protect the astronauts from the vacuum of space, a wide range of temperatures, fire, and even small meteorites. Each seam in each space suit only had 1/32 – 1/64th inch of tolerance, and no pins or seam ripping were allowed, as any holes would put the suit’s functionality in jeopardy. 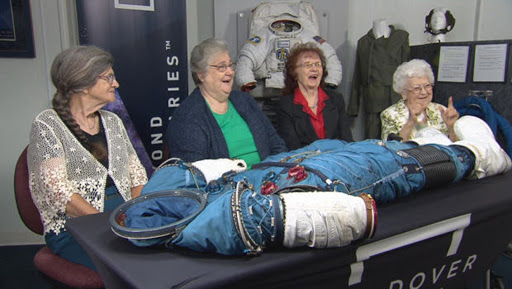 The suits were a huge success for the Apollo 11 mission and allowed the astronauts to move and work freely on the moon’s surface. As it turned out, these expert seamstresses (pictured above) were the only ones for the job. Today, ILC Dover is still the proud provider of NASA spacesuits.