Zigbee is an open source spec for Wireless Personal Area Network (WPAN) communication that allows Zigbee-certified products to connect and communicate using the same IoT language. Companies that utilize and support Zigbee are part of the Zigbee Alliance. To date, the Zigbee Alliance contains over 500 companies, all of which work together to create and utilize Zigbee in their product design. Some of the most noticeable companies in the Zigbee Alliance include Comcast, Honeywell, IKEA, Legrand, Samsung SmartThings, and Amazon. 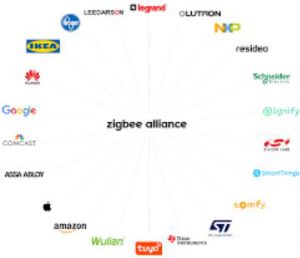 Zigbee was first published in December 2004 and was most recently updated in August 2015. It was designed to be used with control and sensor networks and implements AES-128 encryption.

Zigbee operates on a 2.4 gigahertz (GHz) radio frequency. As seen in the table below, this high level radio frequency gives Zigbee a speed of 250 kilobits per second (kbps) and 16 channels.

Zigbee is short range, which means it can only give a jolt that reaches 10-100 meters with line-of-sight (LOS) propagation. In order for Zigbee devices to be successful, there must be a line-of-site between the devices. While signals can be set up to bounce, it is not a reliable form of communication on the Zigbee network.

Network nodes are the physical devices that make up a network. Each network can only support a finite number of nodes; if too many nodes are added to the network, they begin to compete with each other and stop functioning successfully.

Zigbee functions on lower frequencies so its network speed is relatively slow. The Zigbee network has a maximum signal rate of 250 kbps, which limits the network to text-made instructions, as audio or video communication is not usable. 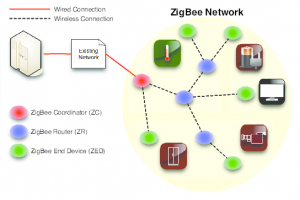 However, the lower network speed also means that Zigbee is able to integrate more nodes into a single network. For example, a Bluetooth network typically holds 20 nodes, while a Zigbee network can support 65,000 nodes.

The Zigbee network is also relatively cheap to install because the electrical components are quite cheap. All of these factors together make the Zigbee network ideal for smart home and control center installations.

The Devices of the Zigbee Network

Each node in a Zigbee network is defined as one of three device types:

The devices in a Zigbee network can be set up in three main topologies: 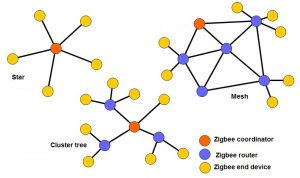 Most home or personal networks use a star topology because it is simple to set up. As you can see from the photo above, the star topology is not very fold-tolerant. If one of the devices goes down, it is no longer able to communicate with the rest of the network.

The cluster three and mesh topologies are more robust, and therefore more likely to be used for industrial configurations. The cluster three topology sets up the coordinator in the middle with multiple routers connected around it. Each router is then connected to several end devices. In this setup, when a router goes offline, you only lose the connection to a portion of your devices.

The mesh topology is the ultimate setup. The devices are connected to multiple routers so that if one router goes offline, the signal can still keep bouncing between other routers. This ensures that small system failures will not derail the network’s productivity.

The slow speeds of the Zigbee network means that the network itself requires relatively little power to operate. In fact, some devices that utilize the Zigbee network have been able to integrate self-powering solutions. Some of the most common solutions have included:

The Zigbee network is commonly used in a number of practical applications, including: 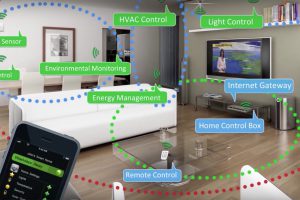 Zigbee in Your Life

As mentioned previously, many large companies, such as Comcast, IKEA, Legrand, Samsung SmartThings, and Amazon, create products that are compatible with Zigbee.

For example, you can connect your Amazon Alexa to the Zigbee network as a hub and connect all of your other IoT devices to your Alexa, thereby allowing your Alexa to control devices around your house. If you have Samsung SmartThings, you can send messages via Zigbee to control your television and other smart devices.

While Zigbee is a formidable force in the WPAN market, it is not the only IoT protocol on the market. Some of the other IoT protocols competing with Zigbee include:

These other IoT protocols each have their own unique benefits, and can sometimes be the more advantageous option based on the applications you want to use. For the home or small office though,I believe that Zigbee’s advantages should make it the first you consider when setting up a WPAN.