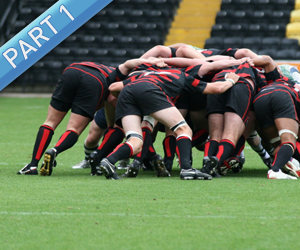 Scrum is a bit like 20th century politics. You have your burn-down crazed fascists, your ground-up “power to the coding plebe” reds, greedy ladder climbers hiding under the guise of scrumocracy, and on very rare occasions… responsible elected representation.

Let’s deal with the fascists first. Your average scrum doctrinaire falls back on phrases like “command and control” to describe the tired, archaic waterfallists. They should poke their own chests with that finger. I’m going to stick my neck out here and suggest that a large percentage of businesses practicing scrum err on the side of a Gestapo-like control. Why? Well let me answer you with a question: What do you think got your Product Owner or Director of Engineering their job in the first place?

Answer: great references, perfect school grades since the age of two and never, ever screwing up. These guys are simply NOT going to let the project fail. They are a proud and elite race of corporate warriors dreaming of business Valhalla (a promotion, crown, or scepter) and the scrum team had better get behind that.

Now occassionally even a proud fascist has to hide their true nature. So while the business proponents listen gently to your Fibonacci estimates during planning poker, you can be sure that behind those polite smiles lies a calculator…translating to hours and days…translating to reich marks. “Are you SURE that’s a 13, Bob?” – strained silence.

“Individuals and interactions over processes and tools”

You got it, that’s from the scrum manifesto. So why the Mingles, the Jira GreenHoppers, the ScrumDesks and the plethora of other surveillance tools on the market? Whatever happened to good ‘ol 3M sticky notes and a whiteboard? Rightwing scrumists are staunch apologists for complex tools and doohickies and demand that their troops log a good 10-15 minutes per day up and down and up and down the square.

Not only does this daily logging crush the team’s will, impede creativity and keep them in lockstep, it also allows the scrum dictator to assess performance from the comfort of their bunker (cube) without the burden of attending standups. Who wants to suffer the humiliation of being called a “chicken” in public? While I can’t exactly answer that, I can claim with confidence that a self-respecting despot will not.

A strong ruler does not tolerate insubordination, and this makes the proponents of the communist school of scrum (described later) intractable enemies that need to be rooted out and destroyed. The reds want to empower the team itself to make decisions and write the schedule, and this flies in the face of middle management’s divine right to rule.

A dictatorial stakeholder will often recruit allies and moles from among the scrum teams in order to attempt to dismantle the scrum process and consolidate power (military coup towards a waterfallist dictatorship) or to bend the scrum process to their will and claim credit (imperialist scrum by mass popularity). It is these two scenarios which scrum-members of communist ideals most fear and have vowed to fight.