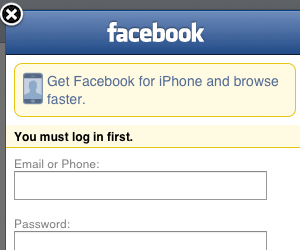 The official Facebook iOS SDK provides an easy way for any iOS applications to authenticate against a Facebook account. If you follow this tutorial, you’ll be able to add facebook authentication in your app in less than 15 minutes. It’s that simple. Once your app has been authenticated, it will possess both access token and expiration date. These two pieces of data will be used in subsequent communication with Facebook.

From your app’s user’s perspective, this authentication process involves the following steps:

These steps seem to be fairly straight-forward. It’s all done by authorize method:

However, some may find it annoying to experience multiple app-switching. And worse, the only place that your code gets a chance to receive access token and expiration date information is at the app delegate:

Fortunately, Facebook iOS SDK has already provided this type of in-app authentication. It’s just not being defined publicly. If you look at the source code, in particular Facebook.h, you’ll see the method signature for authorize:

To make an in-app authentication, you can simply call authorizeWithFBAppAuth with both parameters set to NO:

One way to modify this behavior is to subclass Facebook and override the authorize method. Another way is to directly call authorizeWithFBAppAuth. Since this is not a public method, you’ll get a compiler warning. To suppress the warning, you can call it thru performSelector:

Here’s the screenshot of Facebook authorization dialog within an app: