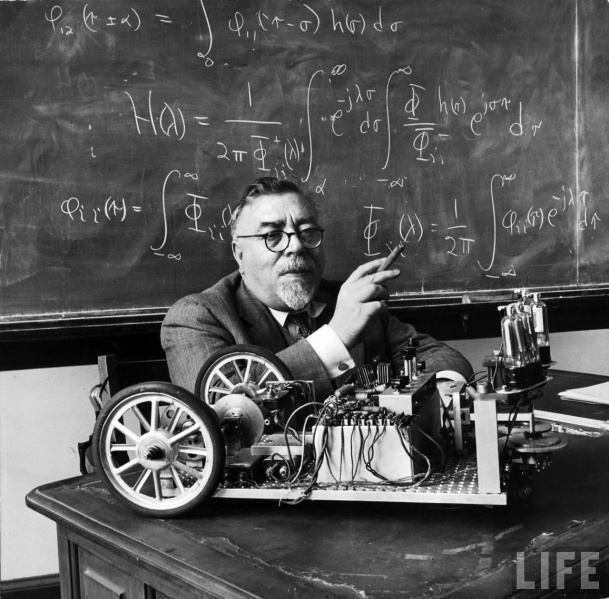 It has been observed that the acceleration of Moore’s Law has left tech culture with a tendency to discount the past, which leads to issues when building for the long-term. If everything we do is going to be circular filed in a few years anyhow, why bother? I think we’re starting to see some of the limits of ahistorical strategies, especially because building for internet scale means that systems can affect higher-order aspects of society and culture in unexpected ways. This is why I want to talk a little bit about cybernetics.

Cybernetics, as a term, dates back to the postwar era and refers to the trans-disciplinary effort to create a universal language and methodology for looking at complex adaptive systems. The way cybernetic concepts are woven into culture and language can be hard to identify, because they’re so well ingrained. The word “feedback,” for instance, came into use during what could be described informally as the era of cybernetics. Its use today is grounded in understandings of the world developed by cyberneticians. The historical figures at the core of cybernetics are also landmark figures in the history of computing.

Cybernetics as a historical moment

Cybernetics was active as a field from the 40’s through the early 70’s. As a field it is concerned with the study of flows and feedback in complex systems, as well as how communication and control function in those systems. It arose at a moment in history that is inextricably tied to WWII and its complexities, and is the predecessor to fields that are more actively relevant today. For Game Theory, Artificial Intelligence, Conversation Theory, and Systems Theory, interactive computing, the internet, and more, you can thank cybernetics.

Without cybernetics, we might not have the discovery of DNA, we might not have modern neuroscience, and we also wouldn’t have networked computing, neural networks, artificial intelligence, et cetera. All of these leaps came as a result of moving from a way of modeling the world that was more linear and discrete, to a way that was more systems focused and complex.

Cyberneticists were also some of the first thinkers talking about automation from a societal perspective, and had particular viewpoints about how society had to adapt when automation began to fill “thinking” roles. Norbert Wiener, historical character of note, and the father of the field, wrote an entire book on the subject in 1950 that addresses what he calls “The Second Industrial Revolution”. It’s an extremely prescient volume called “The Human Use of Human Beings”.

It can be really easy to see software (and the systems it creates) as discrete systems with linear inputs and outputs. The way engineering is taught somewhat encourages this. It’s harder to know what the effects are of complex emergent phenomena. It requires careful research; you can’t assume you know what will happen. That’s in part why there’s such an emphasis on tech today in validated learning and small iterations, and why any software engineer worth their salt values good design, and user research.

As software engineers considering lessons we might glean from cybernetics, I think one of the most important lessons that must be held onto is the importance of conversation and dialogue as part of an engineering process. This means getting out and talking to the people impacted by the things you make, seeking feedback, and importantly finding ways to incorporate that feedback. A cybernetic view might help us keep our eye on the bigger picture and think about what the network effects are for the choices we make as engineers and how that might effect the people we build things for, and also how what we do might impact those we interact with in the day to day. Software and people can both have automated subroutines, and both can have lasting impacts, some of them quite harmful. Good design and engineering both require systems literacy.

There’s also the question of how we think about the projects developed under the mantle of cybernetics and what lessons we might glean from those undertakings today. There’s more there than can reasonably fit in a blog, and many books on the topic. If you’re interested in learning more about cybernetics, here are a few breadcrumbs:

The Human Use of Human Beings, by Norbert Wiener

Molly Steenson’s eyeo talk from 2017 about cybernetics, These Important Years

The 99pi podcast on Project Cybersyn, the project to add cybernetic socialist infrastructure to Chile

The Planning Machine, Project Cybersyn and the origins of the Big Data nation. by Evgeny Morozov

The Cybersyn Revolution, by Eden Medina

From Newspeak to Cyberspeak A History of Soviet Cybernetics, by Slava Gerovitch