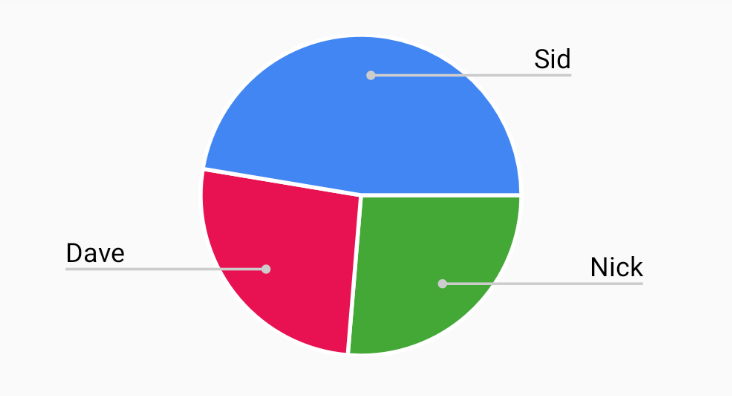 In Part 1 and Part 2 of this series, we covered the basics of custom views and created a simple custom PieChart class that can accept data and display it as a pie chart with indicators.

In Part 3, we’ll add interactive elements that make the PieChart class more usable in a real application. Specifically, we’ll update our pie chart to start in a minimized state with no indicators or names, to respond to a first click by expanding to show the names and indicators for each slice, and to respond to a second click by collapsing back into the minimized state.

Handling the state of the custom view

While we’re at it, let’s define a new property in PieChart.kt called pieState and initialize it to PieState.MINIMIZED. We’ll also add an initialHeight variable to keep track of the original dimensions of our view:

Hiding the indicators in the minimized state

We don’t want the indicator markers or name labels to show up in the minimized state (default when the app loads), so we’ll set their alpha properties to 0 in the init block:

Expanding and Collapsing the View

Let’s take a closer look at the methods expandPieChart() and collapsePieChart():

expandPieChart() sets the new height of the view as a ratio of the width, and makes the paints used for the indicators visible with full alpha. It then sets the new pieState of PieState.EXPANDED and calls requestLayout() and invalidate().

We know what invalidate()is used for; requestLayout() essentially re-measures the view by calling onMeasure() and onLayout() again. We need to call it anytime the bounds of the view are changed (in this case, we are changing the height).

collapsePieChart() is very similar to expandPieChart(). We assign our initialHeight variable to our view height, and bring the alpha on all indicator paints back to 0. There’s a problem here, though — we’re checking to make sure initialHeight isn’t null before assigning it to layoutParams.height, but we’ve yet to set it anywhere. Let’s do that now:

If you’ve reached this section, you should have a pie chart that can be expanded and collapsed by clicking anywhere on its view:

The transitions between the expanded and collapsed states, however, leave much to be desired. Modern mobile users expect animated and seamless state transitions, and ours are still a bit clunky. In the next part of this series, we’ll get our pie chart expanding and collapsing with style — stay tuned!