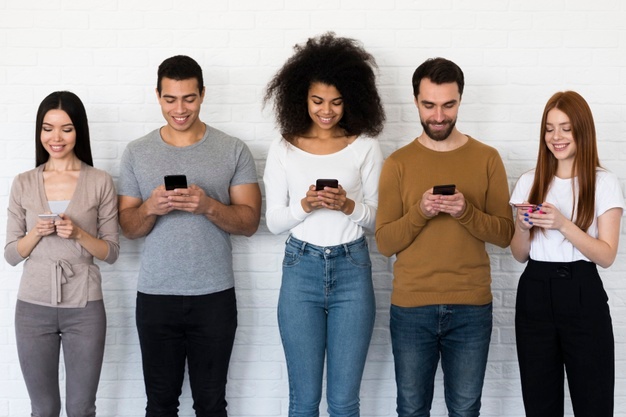 What is the goal of communication? To accurately convey to someone else what you mean. Whatever it is, tonally, contextually, and based on the content, the point of the conversation is to ensure that the person you are talking to is understanding what you want them to understand.

With the rise of technology, the ways in which we communicate have become much more varied and complex. In this post, I will examine how the way we text is a reflection of the way we speak in a society where more and more communication is happening textually.

For the purposes of this post, it is important to understand several definitions, as provided by Dictionary.com and the Merriam-Webster dictionary.

Though we call it “verbal communication,” verbal communication is actually made up of a variety of components. There are the words that you say, the tone of voice in which you say the words, and (if you can see the other person) the body language that you are exhibiting while you speak. During in-person communication, most people tend to both communicate and read other people using a combination of all three of these things, to varying degrees.

However, when using text-based mediums, you are almost always confined to just one component: the text itself. This means that you must adjust the content that you’re sending to make up for the lack of verbal tone indicators and body language that you might otherwise exhibit.

The context of the situation drastically impacts the way that we choose to communicate, both verbally and through text. As with verbal communication, text communication is dependent on who we’re talking to and when.

There are lots of ways to convey an idea, but not every way is appropriate in every situation. The way that we code-switch in these situations is ingrained in many people by adulthood. It’s an innate thing that a lot of people do without thinking.

What are we using language for?

When we are using language to speak to authority figures, clients, or superiors, or having serious conversations, we want to:

In these situations, we trend more toward Standard English, as it has well-established grammar and punctuation, and is the most conventionally accepted for professional communication. Standard English is also utilized when we don’t have the type of personal repertoire where a more casual tone would be accepted or understood. It gets the point across without making assumptions about how the other person will take it.

Conversely, if we are speaking with friends or family in casual conversations, we tend to:

In these situations, we can eschew the traditional conventions of Standard English and relax our sentence structures because we are casually talking, and can trade presentation for honest inflection and speed. The person we are communicating with already understands how we speak, both verbally and textually, so we don’t have to worry about them misinterpreting accidental rudeness or misunderstanding our message because we already have an established rapport.

The Speed of Reply

Among a variety of factors in textual conversations, the speed of reply is a big reason for the shifting grammatical norms. Emails were most people’s forays into textual conversation. As the name “electronic mail” suggests, an email is functionally a letter, and we treat it as such. Emails tend to have greetings and signoffs, paragraphs of full sentences, and standardized grammar. There is not much time expectation placed upon them, and we have the time to write out and edit the message that we want to send, and for the recipient to read and reply at their own pace. This gives both sides more time to format and phrase things the way they want, add font styling like italics, and edit their ideas down.

Texting-based communication, such as direct messaging through a program like Slack or Discord, is far faster and looser, and therefore quite different. Direct messaging is the closest text equivalent to verbal communication due to the speed at which we are able to send messages. It expects a certain level of immediacy due to the availability of our phones and computers all the time. This type of communication tends to use short greetings or no greetings at all, and there are rarely personal sign-offs. You tend to get directly to the point and, if the other person is online, they tend to respond quickly and to the point as well. It is a fast and repeated chat that mirrors a verbal conversation, with interruptions, mistakes, questions, and active participation that makes conversations engaging for everyone.

The Death of Punctuation

The rise of rapid direct messages with no rate limiting, price per message, or paper space has decreased the need for final punctuation. Hitting enter (send) takes as much character space and time as a period, and it lets the other person start reading and processing your first line as you begin to write your second, much the way they would process your sentences in real time if you were saying them out loud.

Consequently, including a period in a conversation now carries more weight because it’s both not necessary to indicate the end of a thought (you have to send the message anyway), and it requires the effort of an additional keystroke. I’ve found that even in more professional text-based messaging, such as client Slack channels, periods have become nearly obsolete because they are simply not needed. Now the presence of a period itself can be a tone indicator for people who don’t regularly use them.

Ellipses tend to be fairly contentious as far as tone indicators go. There are certainly generational gaps in how people read ellipses. However, the connotation of the ellipses also shifts in different online communities. For some people, the ellipses are innocuous, and portray that they are thinking or unsure. For other people, ellipses hold negative connotations. In rapid-fire conversations, taking the time to add three keystrokes, especially at the end of a sentence, can feel as if the sender is trying to send an implied message or withholding some thought or opinion. This can lead to confusion about the implied tone of the message.

Building Blocks of a Modern Dialect

Like all languages and dialects, the mediums we speak in shift the way we talk. In the era of early internet users, before the World Wide Web, most users were fairly tech-savvy because they had to be in order to use and build capital-I Internets. Therefore, their slang, community memes, and abbreviations became standard because, as more people learned how to use the internet, that’s just how people who used the internet talked.

In earlier text messaging, abbreviations became the norm because typing on a 9-digit phone keyboard took a lot more time than a computer keyboard, and there were character limitations per text. This meant that you had to get creative to get everything you needed into one $0.10 text message. When full and digital keyboards and unlimited texting became the standard, these creative workarounds stuck as well as part of the culture of text messaging.

Tagging systems have also made their way into active language. Things such as hashtags and blog tags, which are customarily used for sorting tags, posts, or tweets, almost instantly entered the cultural zeitgeist to be used out loud and generally for the purpose of irony. In tweets and posts, tags can serve as a place for commentary outside of the content you are posting. The commentary isn’t strictly necessary for the content, but it’s a place for authors to comment on the work they are putting out there, packaged with but somewhat separated from the content itself. Hashtags and sorting tags have contributed to the popular disuse of punctuation and capitalization because breaking tags up by punctuation and spaces separates them or nullifies them, which breaks the hashtag, and capitalization is often lost because most searches use case-insensitive means of sorting. This has in turn carried into the way we communicate vocally and textually.

When you write a sentence, it exists as a blank canvas on which we can apply tone and mutually understood meaning. When you put a sentence on a blank canvas, your setup is dependent on both what you think makes you understood and what you know the other person understands. Based on the context we are speaking in – both the person we are speaking to and the situation we are currently in – we can add or remove words, styling, punctuation, capitalization, and flair from the sentence until we have what we want to present for the person it is going to.

You can see this blank canvas phenomenon in the texts exchange examples below:

While the word content of these messages is exactly the same, the tones indicated and the feelings portrayed are completely different.

Let’s examine the tone markers in the second example further:

As you can see, all of these changes indicate tonal and contextual context that the first example is unable to indicate. In the first example, everyone puts forward what they want to say altogether. There is not a lot of room for discussion or feelings about the situation. The situation of the lateness and expected arrival time are clear and acknowledged. Everyone knows factually what is going on, and their opinions on the matter are kept to themselves.

The second example is a more active conversation, between people who are likely close and used to speaking regularly. There are freely used tone indicators on both sides, conveying both the information and the feelings surrounding the circumstances.

Despite the radically different presentation, both examples represent effective communication tools, as both clearly presented the information that the receiving party understood and acknowledged. Context is king.

Some of the tone indicators that we commonly see in online communication include:

These indicators mirror the ways we vocalize tone in spoken communication.

Tonal indicators can also be represented with symbols in textual conversations. These are usually text communication-specific indicators since we either have other methods of conveying them out loud or they are simply things that can only be conveyed through textual means. Some of the most common examples include:

Emojis: A Return to Hieroglyphics

A post about tone on the internet would be remiss without mentioning emojis. Emojis and emoticons are not new; they have always served to indicate tone in text and facilitate communication. However, just like line breaks, emojis can function as punctuation to lighten the tone.

Emojis were always meant to be tonal indicators and fun text flare. Their repeated usage has integrated them pretty deeply into communication culture, giving them meme status and the ability to convey complex emotions.

For example, in the place of a period, we can append a smiley emotion to indicate positivity or remove any possible doubts about perceived negative tones. We can react with emojis to things that other people say to show that we show and understand in just one picture without having to unnecessarily lengthen the conversation. Some emojis are so ubiquitous that they take on meanings that require far more words to explain than just the emoji itself. The upside-down smiley face emoji has nearly a universal negative connotation and feeling that most people understand, yet are unable to explain with words alone.

If you want to learn more about this topic, I recommend you read “Because Internet” by Gretchen McCulloch, which talks about a lot of these concepts, examines how the founders of the internet impacted textual conversation today, and delves further into meme culture.