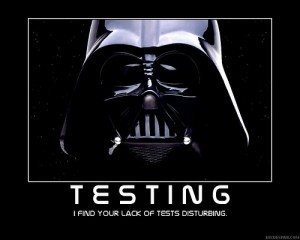 As a recent convert to Test Driven Development (or TDD as his friends call him), I was surprised to hear that there were in fact 2 kinds of developer driven testing.  The standard one that everyone knows of is unit testing:  writing little testXXX methods that test a single publicly exposed method.  But the lesser known – but just as important – are acceptance tests:  tests which verify that  a group of classes working together properly fulfill some functionality.

So this first post will take a closer look at the first type of testing, unit tests, and will go into the value it provides to you as a developer.

NOTE: You can find the code discussed in this post at this GitHub repository.

Unit tests focus on testing your assumptions as a developer on how the class being tested – the system under test or SUT – interacts with its dependencies to perform some action or calculation.  So the idea is:

So, let’s look at an example.  Imagine you have the following class which has a single dependency:

So looking at the code, there are 4 operations that need to be tested for this method:

So here’s our first cut at the tests:

First, you’ll notice that I’m using EasyMock to create a mocked version of the Dependency class. EasyMock allows you as a tester to:

After setting up our expectations on the mocked dependency, we mark it as being ready to use with the replay(...) call, inject it into the class to be tested and execute the method being tested. We then verify the results in one of 2 ways.

The second is to verify the returned value from the method being tested meets our expected results. You can see this in second and forth test where I use the JUnit assertXXX methods.

So looking at this we’re completely done and ready to move on, no? Not really.

What happens if we pass in null into methodToTest? Would that mean the checkSomeValue would return false or throw an exception?

This is where I believe unit tests provide one of it’s greatest value: unit tests force you to analyze and document your assumptions on how the class you’re depending on works.

So let’s deal with checkSomeValue method and how it deals with a null input. Let’s say that the provider of the Dependency class states that the expected behavior of checkSomeValue is to return false if the provided value is null. If so, then the check value test would fail and the method we’re testing would do what it always does when the input string fails: it returns null. So let’s write a test to assert and document this assumption!

So what would you do? You would group those dependencies by functionality and create an object to encapsulate the functionality created when those similar objects work together. Then you can refactor your class to use those higher-level objects and get rid of all of those fine-grained dependencies. Then you’re unit tests would be much easier to write, because you would have fewer dependencies to mock and fewer moving parts to worry about when testing a method.

And this is the second greatest benefit of unit tests: the pain of setting up your dependencies forces you to analyze how you’re using them. And this analysis usually leads you to refactor your code to make it simpler and cleaner.

But unit tests can’t do it all, so until next time when I’ll write about acceptance tests and how they can really ramp up the quality of the code you produce.