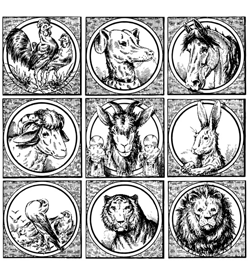 For Starters
For starters, in the most general terms, 9-patch is a type of bitmap image, specifically a transparent .png file used by the android mobile os that is scalable and can stretch and adjust to different sizes. Using 9-patch allows  you to stretch an image in a manner where the 4 corners can remain unscaled, while the edges of remain intact – a method especially useful for scaling images with rounded corners.

These images are typically associated with button images, however 9-patch can be used for any image, e.g., backgrounds, headers, etc.

9-patch files are not your ordinary transparent .png files.
A valid nine patch includes two essential components that differentiate it from other transparent .png files used by android. The first is that “.9” is included in the file name before .png – this identifies the file as a 9 patch to android.  It basically says to Android OS,

“I’m special, I am a 9-patch.  When you look at my contents I will have some very special information just for you… and it will be exactly where you expect to find it.”

This special information comes in the form of the second essential component which are black pixels in the 1 pixel perimeter edge of the image.  Okay, here’s where it gets juicy.

Top, left, right and bottom make up the perimeter of our .png. We are going to take these four units of the perimeter and separate them into 2 separate guide groups:  1) Top & Left and 2) Bottom & Right

Content Area – The bottom and right guides determine the area of the image within which any text, label, icon, (other) image or element placed within your 9-patch will be constrained to.  By default, the entire image area is regarded as Content Area and the Content Area guides are considered optional. We recently encountered some unusual issues where 9-patches without Content Area guides were not drawing properly – so lately I am of the mindset encouraging their inclusion. Keep in mind you can easily override the content guides manually in your code if what you set up in the 9-patch needs some adjustment – just as easily as you would set them manually if you excluded Content area guides from your 9-patch.

Do What Android Want = Android Do What You Want

Remember, there are some very explicit rules about these black lines.

9 patch images scale up… but they do not scale down. If you have a minimum size in mind for your image, start wth that.  9 patch is all about stretching and expanding – NOT shrinking and compressing.

As it turns out there isn’t much mystery to the 9patch at all, and the real  mystery is merely how can it be so simple.