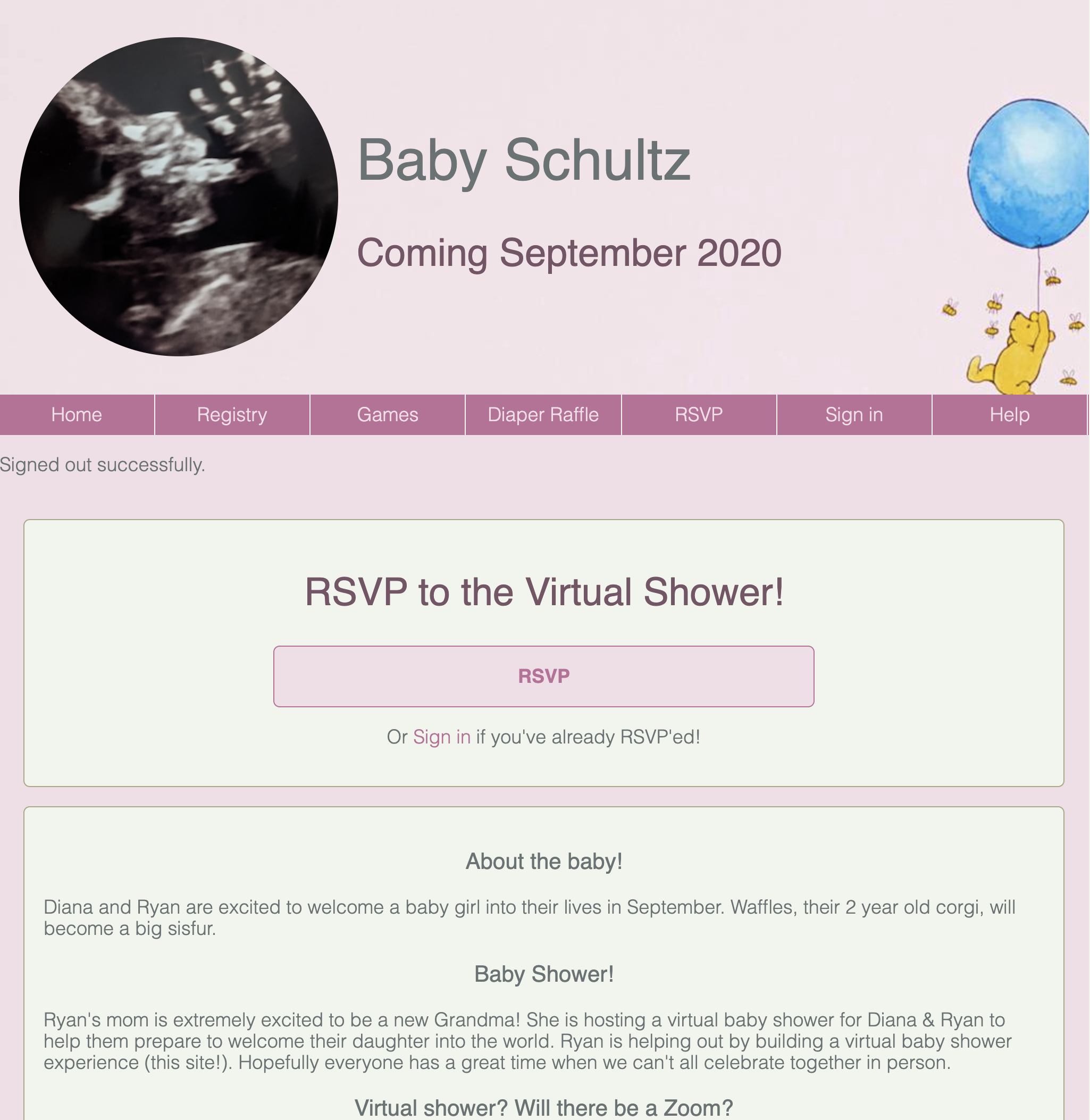 Since COVID-19 began, all of us have been looking for good alternatives to our traditional in-person get-togethers with family and friends. In this post, I’m going to be talking about my most recent side project creating a virtual baby shower.

Why Work on Side Projects

Side projects are a big topic in our field, and there are a number of benefits to working on side projects in your free time, including:

For most of us, there are two types of side projects: you either learn something new or you get something done. Over the years I’ve probably done  25-30 small side projects that were never in a usable state, but helped me to learn a new skill. For most of these side projects, I have learned a technical skill, but they will likely go nowhere.

While these types of projects are great for learning something new, if your focus is to get something done, it’s usually best to focus on a skill you already know. That’s not to say you can’t learn something new and do something useful at the same time. However, when your time is limited, it’s typically best to have side projects that aim for only one of the two objectives.

There can also be disadvantages to our industry’s focus on side projects. When side projects have the potential to cause you to burn out or when you don’t have an idea for a side project, it’s okay to take a break. After all, doctors don’t come home from work and perform hobby surgery to get better at their profession.

It’s therefore best to pick side projects you are excited about when you have the time to do them.

For my most recent side project, I decided to create a virtual baby shower. My wife and I are expecting a baby in the fall and my mom wanted to host a baby shower for us, but, due to the current coronavirus pandemic, we were unable to travel to have the shower with our family. When we began to talk about the possibility of a virtual baby shower, we quickly decided that we didn’t want to have the standard Zoom event that has currently become popular.

Some folks we know who have attended Zoom baby showers told us about their experiences.  As with most video calls, a few key people dominated the call, and many of the participants didn’t know how to mute their mics, so there was constant background noise. We also thought it might be awkward to be in a Zoom call with people you don’t know that well – my wife has only met my extended family a few times, and I myself rarely see them. We therefore decided that we didn’t want to have a video chat for our baby shower.

The Big Picture Concept for the Virtual Shower

After time spent brainstorming, we decided we wanted to have a non-Zoom virtual baby shower that included the following features:

Once we had the general concept for our baby shower, I began to build the actual application for the event.

The constraints and considerations for this project were as follows:

When designing the tech stack for the application, I wanted to pick programs that would maximize efficiencies for both application production and deployment. After careful consideration, I decided to use the following programs:

As part of the creation of the tech stack, I specifically chose not to include the following tools:

I can see the value of these on a much larger project where you want to have standardized components. However, given the size and scope of my baby shower application, they were not necessary.

I started to develop my application by porting a static announcement site into Rails 6.0. I made the site dynamic and I gutted out the bootstrap things to replace it with my own simple CSS using flexbox. I used a free color scheme generator to randomly generate color schemes until I found one I liked and I applied that to my application.

Due to the size and scope of this project, I did not write any tests for the application. I tested the application on my own devices and concluded that if it worked for me, it would likely work for the other 13 attendees.

To keep the feel of a real baby shower, we wanted to give guests the chance to play several different games. I created a list of games for the guests to view, and set up each game so that the user could see their submissions and/or results after playing.

We released four games over the course of several weeks. At the end of each game’s play period, the winner or winners would be given raffle tickets for the prize drawing. Each game had a slightly different build based on the construct of the game:

One of the largest challenges in the development of this application was choosing what to prioritize with my limited time allotment. Deciding early on what to not spend time on and what to not build was valuable, because it helped me stay within my desired time commitment. Some of the features we considered, but did not implement, included:

For scaling purposes, I decided to run two instances of the application. While I certainly didn’t need two instances given my expected activity, I knew it would result in a more robust system. I used Docker’s DNS round-robin with Nginx to reverse proxy to the application instances. The DNS seemed to favor one instance or the other, but my logs revealed that both instances did get traffic.

I deployed the application on my personal server, running a KVM-backed virtual machine. I therefore had the resources of 16 gigabytes (gb) of RAM, 8 CPU cores, and 80 gb of SSD storage in RAID 1. To deploy my application on the server, I ran Nginx on the host that pointed at the docker reverse proxy so that the host Nginx was the entry point into my server through the firewall. This allowed it to handle all of the secure socket layer (SSL) terminations.

Once the procedure for deployment was set, I pushed my Git-repo from my laptop over Secure Shell (SSH) to a directory on the server. I then pulled the working copy from that directory and used a deploy script for deployment.

The deploy script was able to:

The reality of side projects is that you never have as much time as you’d like. If I had been able to invest more time in this application, there are several key improvements that I would have focused on:

As I mentioned at the beginning of this post, every side project is either a chance to learn something new or to get something done. For me, this application presented the perfect opportunity to use my skillset to do something special for my wife and my family.

After undertaking this project, I have come away with several key takeaways:

With the imminent arrival of my child, my next side project will likely be focusing on being a dad for a while. However, I loved that I was able to use my skills to bring my family together in the midst of the pandemic, and I look forward to future family-focused side projects.