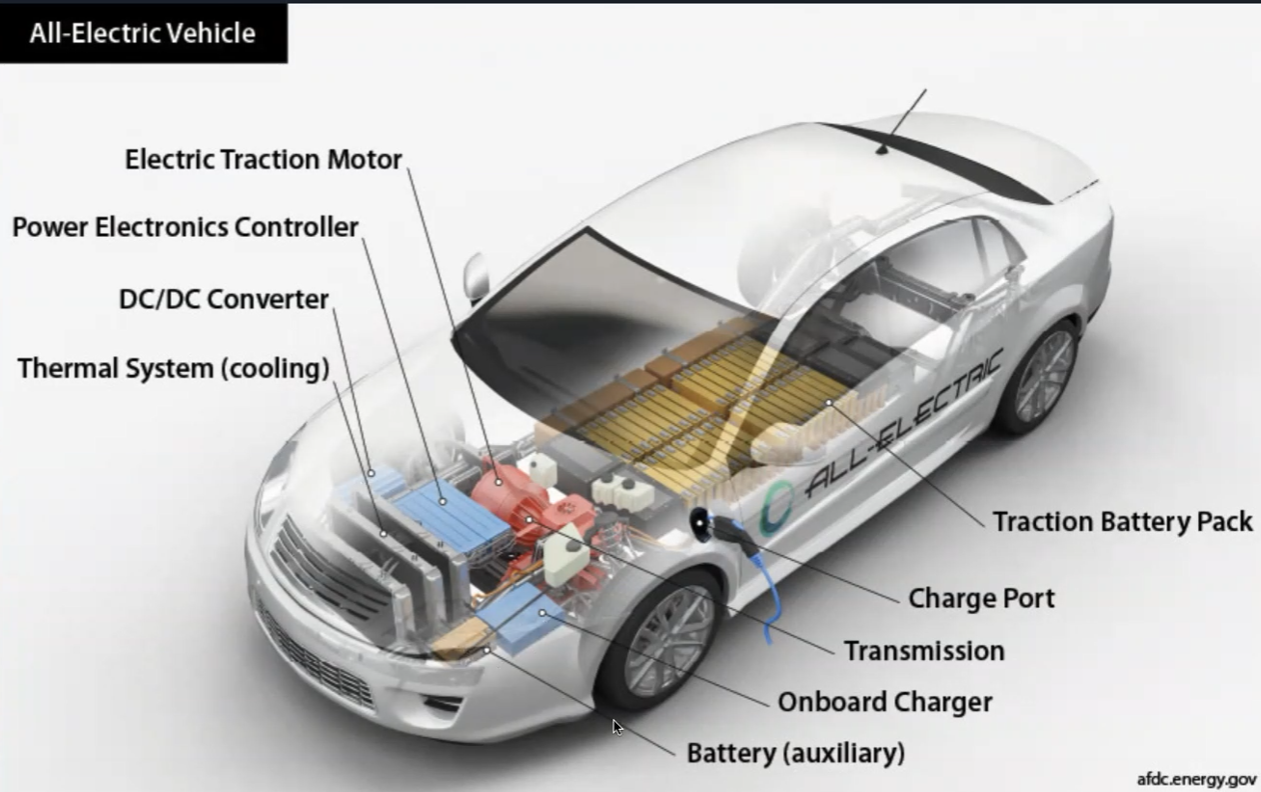 If you didn’t care about electric vehicles (EVs) before, the current gas prices might have you rethinking your stance. With EV sales on the rise, we are seeing the beginning of an automotive revolution; one that will likely change the framework of American transportation in the next few decades.

In this post, I am going to discuss the history of EVs, the challenges and benefits of the EV revolution, and why you should care (if you don’t already).

A Brief History of Electric Vehicles

When most people think of the automotive industry they think that the internal combustion engine (IC) was the beginning of our lineage; however, it was really the electric vehicle that was first on the scene. In the 1830s, Robert Anderson invented the first concept of an electric carriage. The carriage utilized a single-use water-electric battery that worked with electromagnets to turn the wheels. This invention spurred a new age of locomotion.

The next significant jump was in 1881, when the first human locomotion was invented in France. The EV tricycle could go up to 3.6 miles per hour (mph) under its rechargeable electric power.

America, a bit behind the technological times, did not invent its first electric vehicle until 1890 when William Morrison invented the Morrison car. The Morrison car could go up to 14 mph and was another promising step in EV evolution. However, in 1908, Ford released the Model T, the first internal combustion (IC) engine automotive, and EVs were effectively eliminated as a viable competitor.

The Model T proved that IC vehicles could outperform EVs in both time and range. This was especially appealing for Americans, given the sprawling, spread-out nature of America at the time. With an IC vehicle, you could bring a container of gas in your trunk and explore the countryside at your leisure.

However, EVs weren’t completely killed. In the 1970s, when gas prices began to rise, there was a mild resurgence of EV home conversions. Individuals in garages began converting their IC cars into EV hybrids. The major manufacturers joined the party in 1997 when the Toyota Prius (hybrid) and General Motors (GM) EV1 (full-electric) were released. The Prius was especially popular, and it became an icon for hybrid cars. Tesla released its first vehicle in 2008, and the EV movement has experienced both innovation and growth ever since.

There are several types of modern electric vehicles:

The primary benefit of EVs can be seen in this figure from the Department of Transportation: 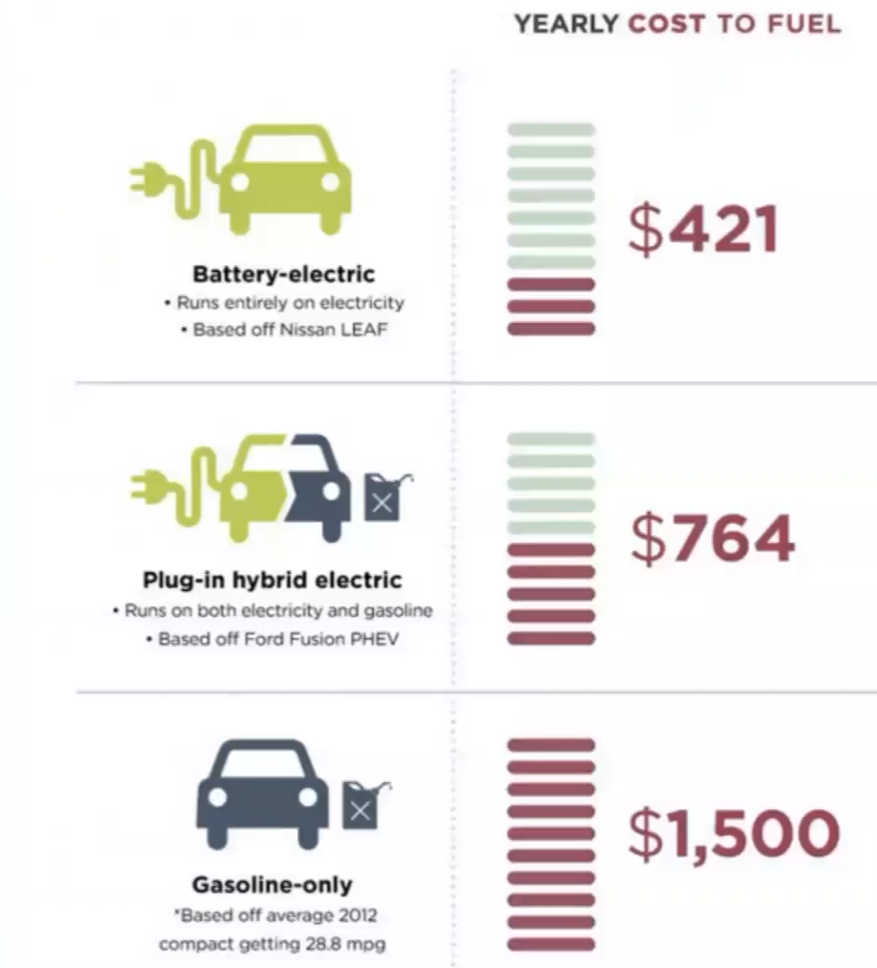 Though these numbers are no longer indicative of today’s prices, they do highlight the savings you accumulate when you have an electric vehicle.

We are all feeling the burden of elevated gas prices right now. However, I’m happy that they are going up because it means that Americans are finally pushing the EV revolution forward. We, as a society, tend to be comfortable and complacent until something pushes us in the right direction. It appears that the high gas prices have become the thing we needed to make the move to hybrids and EVs.

The government also released these stats on hybrids and EVs: 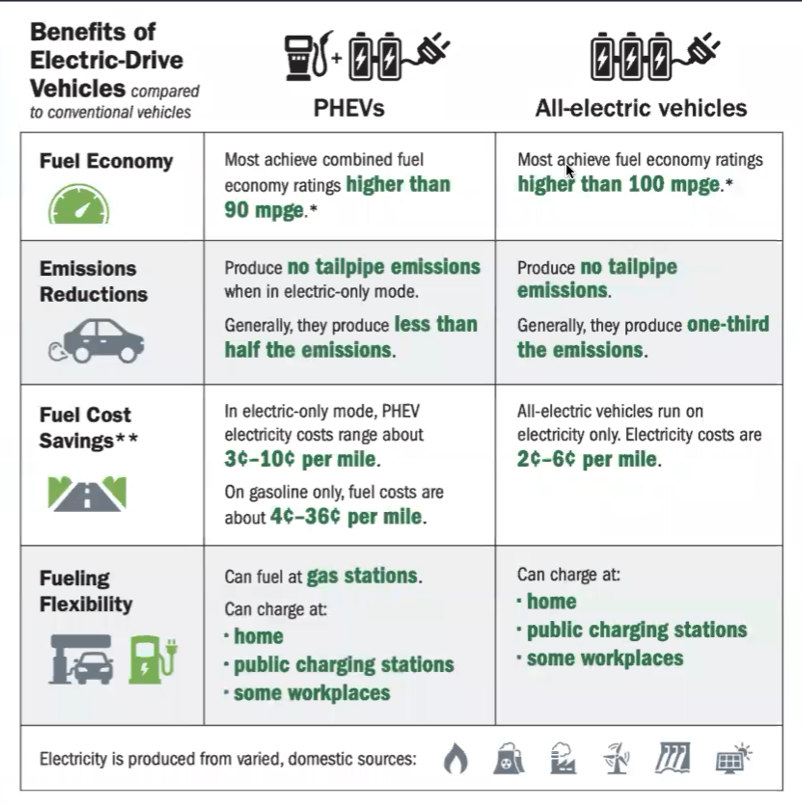 We can see from the graph above that there are significant gains in emissions reductions and fuel costs when switching to an EV. 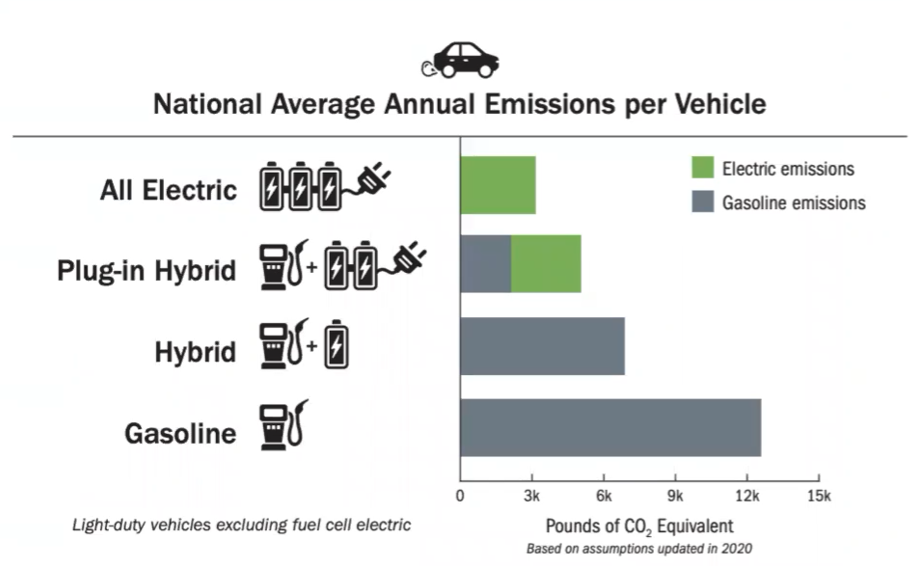 And as the above graph clearly indicates, for those of us who care about having oxygen to breathe, the CO2 to atmosphere percentages seem to be far more beneficial for all-electric vehicles.

What are the Parts?

The EV is actually surprisingly simple. While the average internal combustion engine has 315 moving parts, the EV electric motor has only one.

In addition to the motor, each EV has several other standard parts, including:

Here’s another breakdown of how the different parts come together: 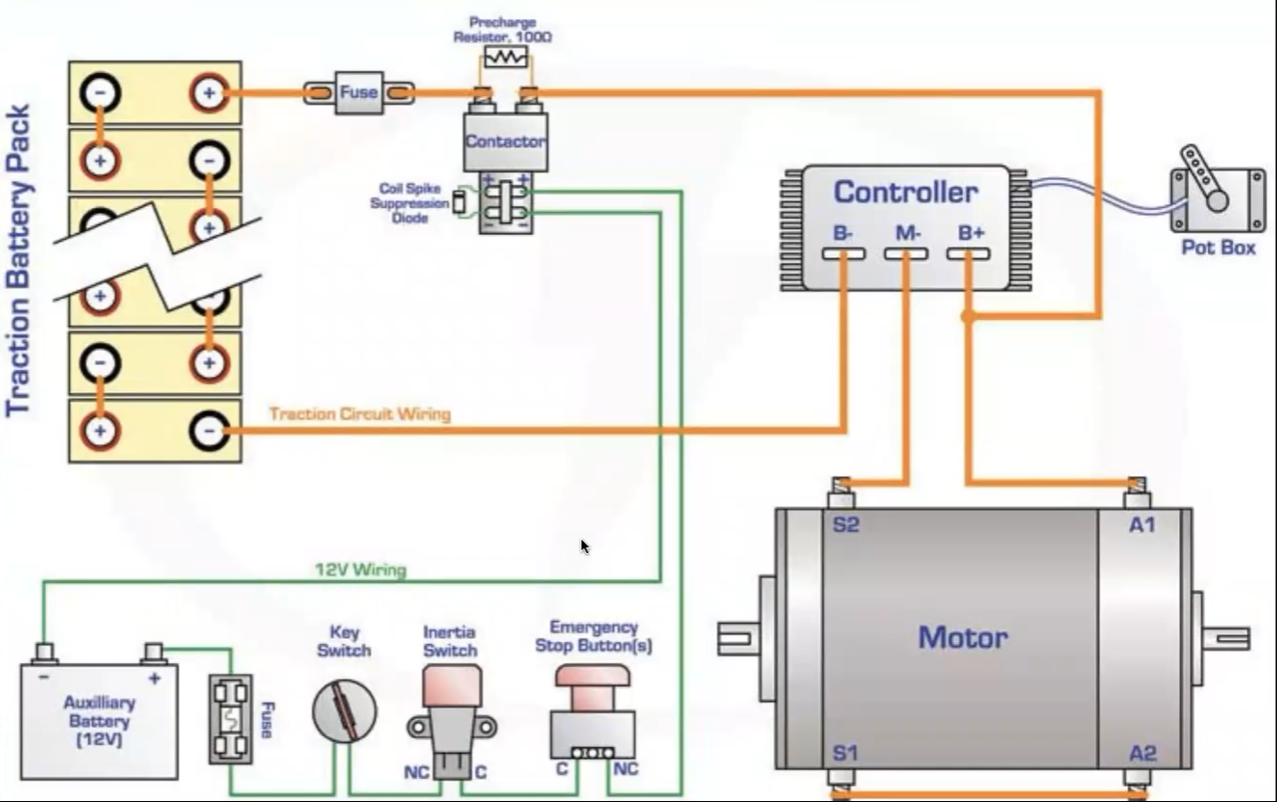 As you can see, you start with the battery pack on the left. Energy runs from the battery, through a fuse as a safety precaution, to the contactor. A contactor is an electrical device that comes with a couple of magnets inside of it and two high voltage connections. A small 12V wire connects the contactor to the auxiliary battery and key switch; when you turn your key in the ignition, the 12V wire closes the contactor, bringing the whole loop live with electricity.

Charging is a big part of the EV system. If you have an IC car, you can go to any gas station and fill it up. Everyone has the same gas, and it all goes in the tank the same way.

Charging for electric vehicles is very much in its infancy. As such, there’s a lot of differentiation in what is available.

As of today, we have three levels of charger: 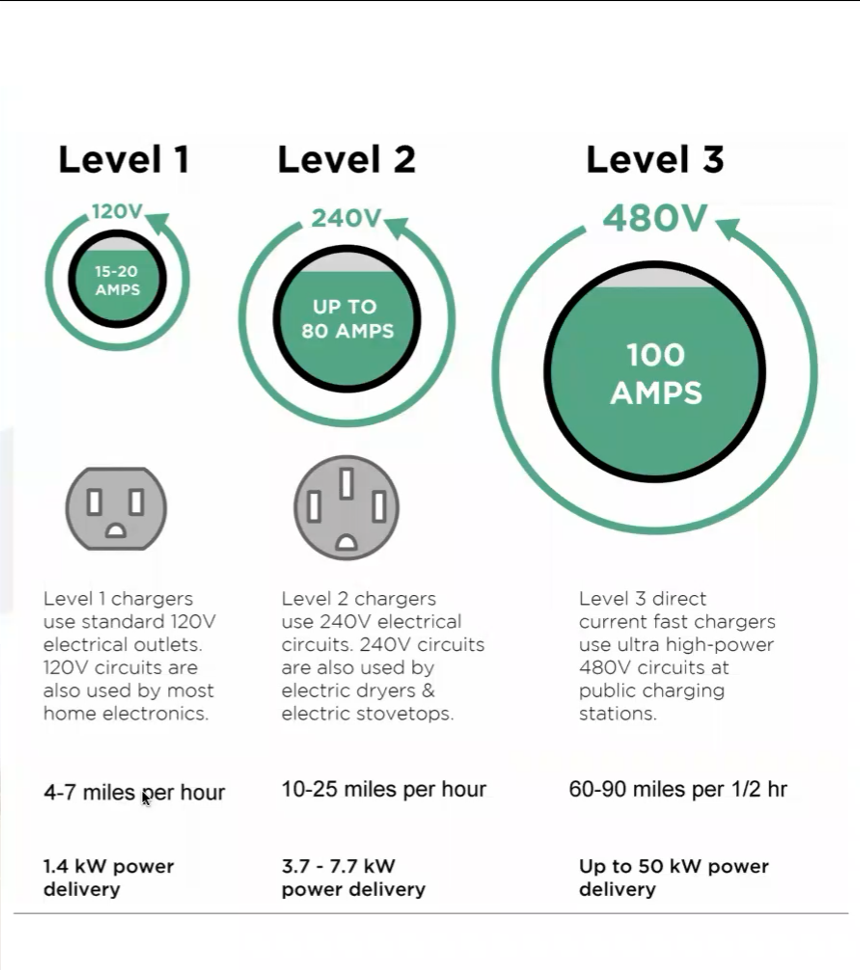 Level 1 charges at 4-7 mph. Level 1 charges are typically seen in home charging stations that use a basic wall charger. The amount of energy collected from the Level 1 charger is low, but is sufficient if you don’t use your vehicle very often.

Level 2 charges at 10-25 mph. Level 2 requires a charging port that can produce up to 240V, such as the plug you would use for your dryer vent. With a Level 2 charger, you can reach a good charge overnight.

Level 3 charges at 60-90 miles per half hour. This DC fast charger is most well-known as the chargers used in the Tesla Supercharger Network. The Level 3 charger is currently the fastest charge on the market and is the critical number as we, as a society, continue adopting this technology. The quicker we are able to charge, the more viable the EV option will be.

More than the lack of fast chargers, the availability of chargers represents a major hurdle that EVs must overcome. The map below shows all the supercharger stations Tesla has in North America: 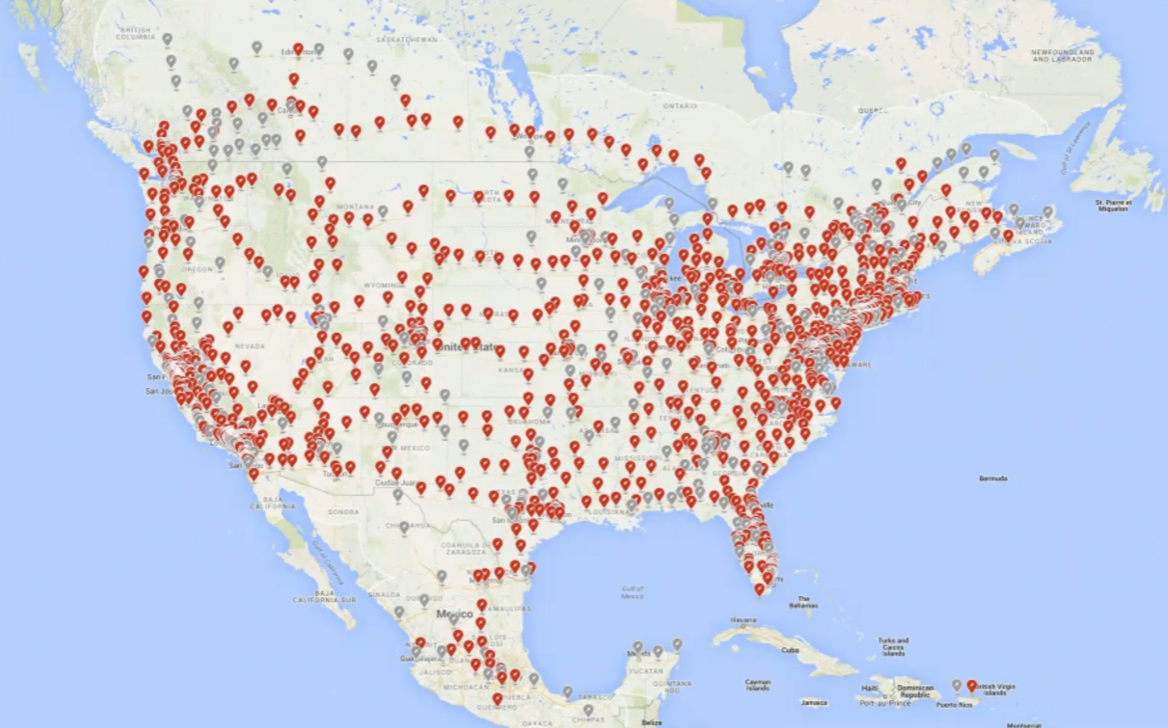 While many of the cities are well-covered, the availability of chargers in rural areas is lacking. And this is if you have a Tesla and can use the supercharger network. If you have another EV, these are the only charging stations available: 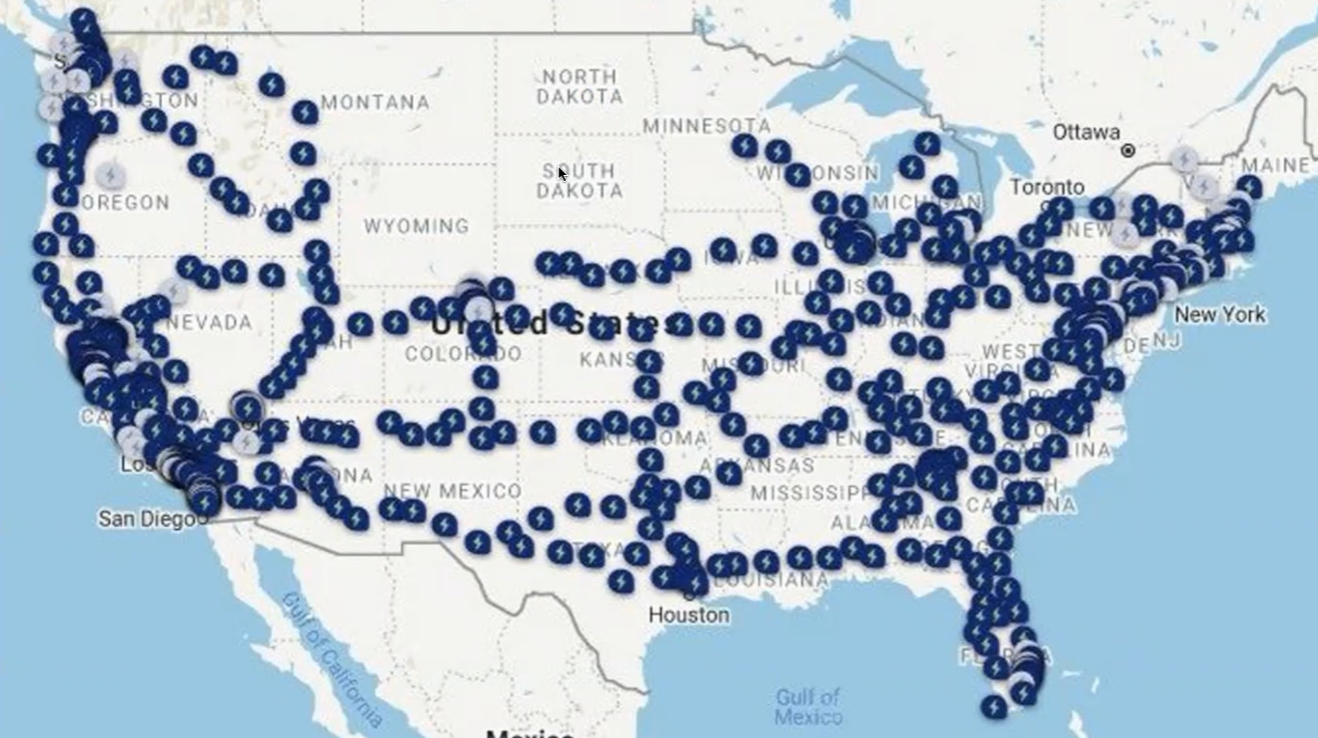 For people, like myself, who enjoy traveling and road-tripping, the current EV charging constraints present an insurmountable obstacle.

There are also additional challenges to charging: 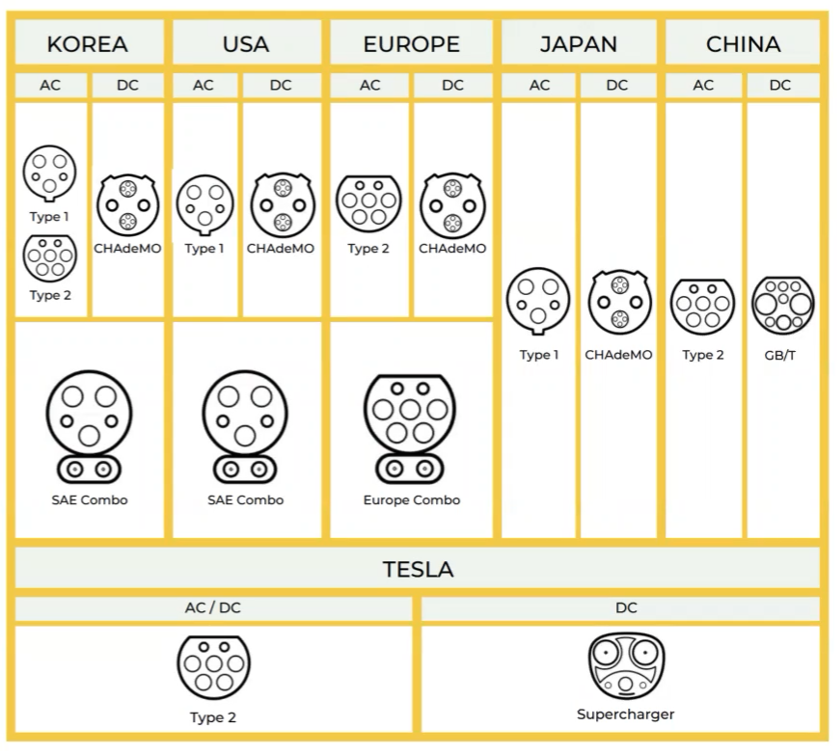 There are a couple of bills in the works right now, so this may be improved in the upcoming years, but there are not currently any concrete solutions.

EVs have a number of challenges, including:

Despite the challenges with EV technology, there are a lot of advantages as well:

In 2015, the Department of Energy generated the following graph documenting EV’s projected numbers from 2015-2050. According to the graph, they predict EVs will overtake ICs in 2048. 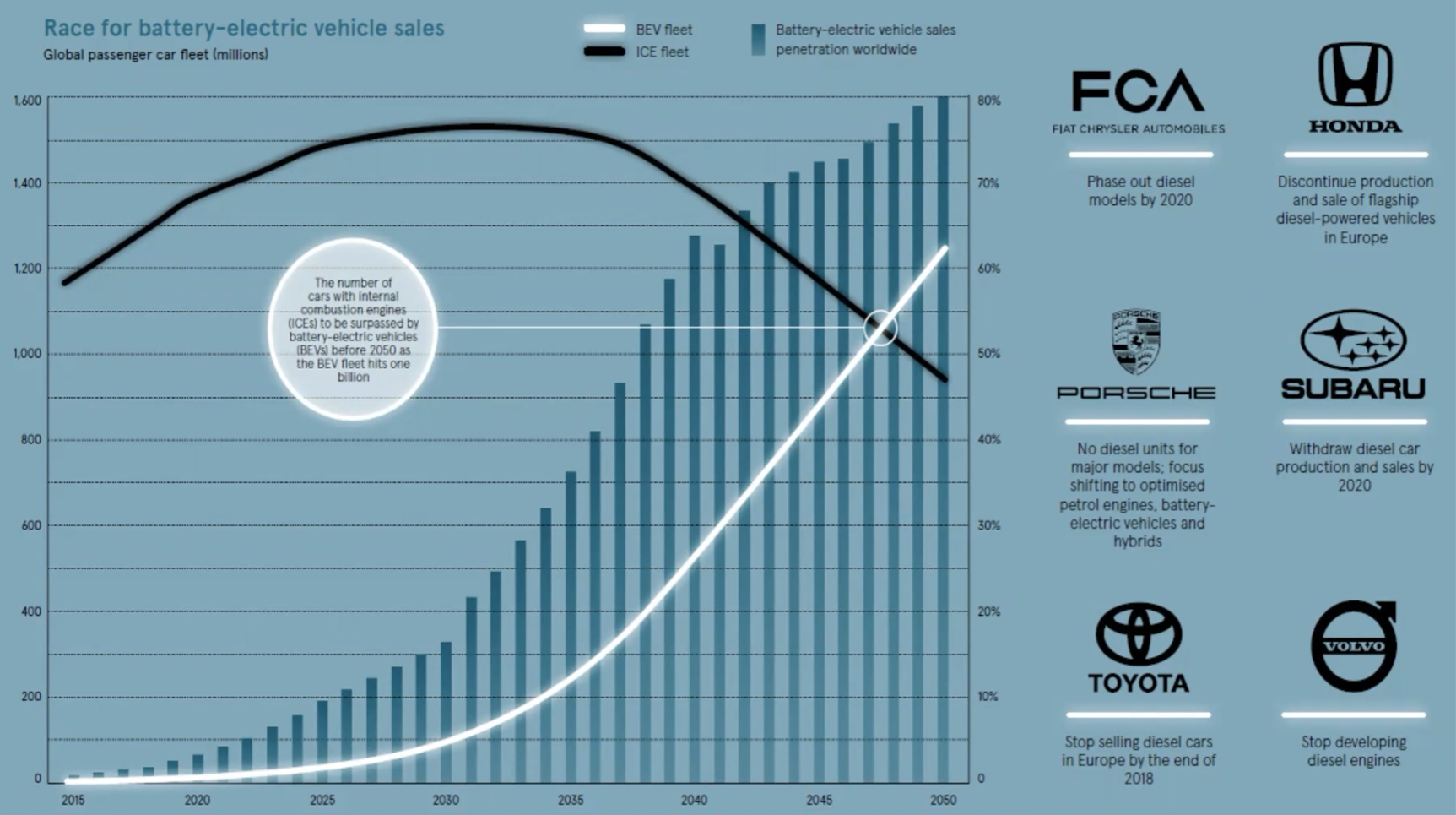 In my opinion, this graph is conservative. The rate of adoption is already higher than analysts were predicting a few years ago, so there is a good chance that EVs will surpass ICs much sooner.

The moral of the story is that you should strongly consider an EV when purchasing your next vehicle. There’s going to come a time in the not-so-distant future where that classy IC you have is going to be very difficult to sell on the secondhand market.