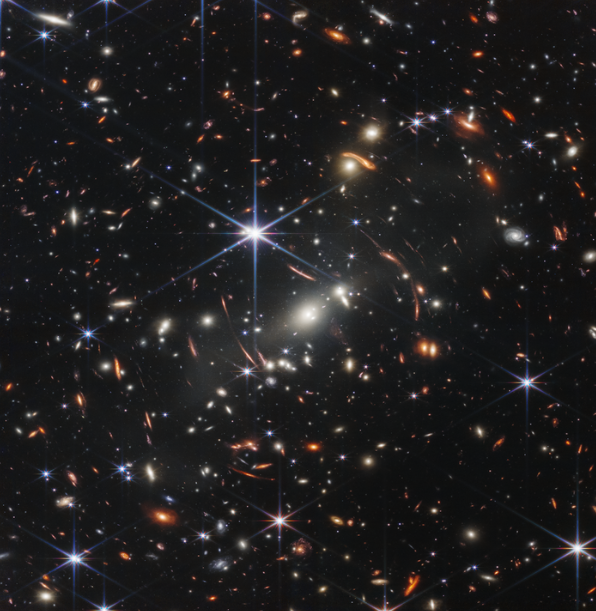 On December 25, 2021, the James Webb Space Telescope (JWST) launched from Kourou, French Guiana. Hailed as the most powerful telescope ever built, the JWST is expected to provide 5-10 years of infrared imagery that will allow us to learn more about space than ever before.

If you are a fellow space enthusiast, you probably saw the initial image that was released in July 2022:

Though busy enough to be more akin to an airport carpet than the sky we see when we look up at night, this image is actually more representative of space than what is visible with your naked eye. Thanks to the powerful infrared imaging of the JWST, this image of galaxy cluster SMACS 0723 represents a slice of the universe that covers “a patch of sky approximately the size of a grain of sand held at arm’s length by someone on the ground.”

How did the JWST capture this photo and what else can we expect to see from JWST in the upcoming years? These are the questions I wanted to explore in this week’s blog post.

The James Webb Telescope was a collaboration between NASA, the European Space Agency (ESA), and the Canadian Space Agency (CSA). The JWST is more accurately an “infrared observatory,” as it contains complex operating, recording, and navigation systems as well as the telescope itself. Collected information is transferred to NASA twice daily via antenna.

The goal of the project is to get high-quality images of things we’ve already seen, as well as to study things so old that the light they emit has shifted out of the visible spectrum. The hope is to use the telescope to see the first galaxies and stars of the universe.

The JWST is operating based on four primary science mandates: 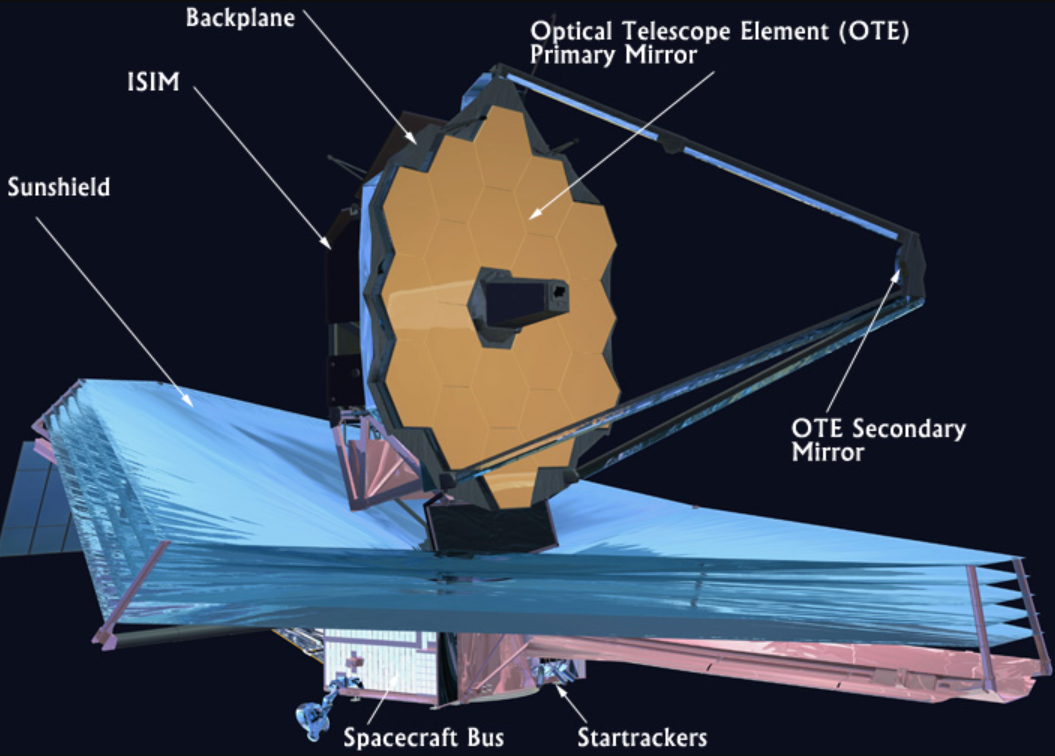 The Components of JWST

Primary Mirror: Simply put, space mirrors represent a situation where bigger is, in fact, better. The larger the mirror, the more light we are able to reflect and the better the image that we are able to capture. Infrared light has longer wavelengths than the visual spectrum, so an even larger mirror is needed to capture them clearly. For that reason, the JWST’s primary mirror is the largest of any space telescope to date. The primary mirror is made of 18 hexagonal gold-coated mirror pieces and spans 6.6 meters in diameter.

However, bigger is NOT better when we are talking about launching something into space. NASA, ESA, and CSA got around this problem by folding the primary mirror during launch, and then carefully unfolding it over the course of two weeks once it was in space. Then each hexagonal piece was individually manipulated to form a cohesive, circular mirror that can be pointed at singular objects in space.

ISIM: The ISIM is the scientific instrument module behind the primary mirror. The ISIM contains the cameras (four total), instruments (navigation and flight software), and subsystems (cooling and command systems) that take in the light from the mirrors and process it.

Sun Shield: The JWST has to be kept quite cold to prevent heat from throwing extra infrared waves and disrupting the pictures. In addition to being launched in a location that allows it to stay in the earth’s shadow, commonly called L2, the JWST also has a massive, open-concept sun shield at its base that prevents direct rays from the sun from hitting the telescope. The open design allows the telescope to be cooled by space itself, which allows JWST to thrive with far fewer coolant requirements than previous telescopes, and hopefully extends its active lifespan.

Spacecraft Element: The observatory support systems are located on the opposite side of the sun shield. Playfully referred to by NASA as the “spacecraft bus”, the backside of the JWTS contains the electrical power, altitude control, communication, command and data handling, propulsion, and thermal control subsystems.

Infrared astronomy is the process of using telescopes to capture and read infrared waves instead of visual spectrum light waves. Unlike most common telescopes any of us would use, the JWST records infrared waves as its primary data input, and can capture only a bit of red visual light.

There are three main benefits to focusing on infrared light:

However, because the images are captured in infrared, rather than the visual spectrum, the pictures aren’t captured in their proper colors, so color filters must be applied afterward. This phenomenon is very noticeable in the JWST’s incredible photo of Jupiter: 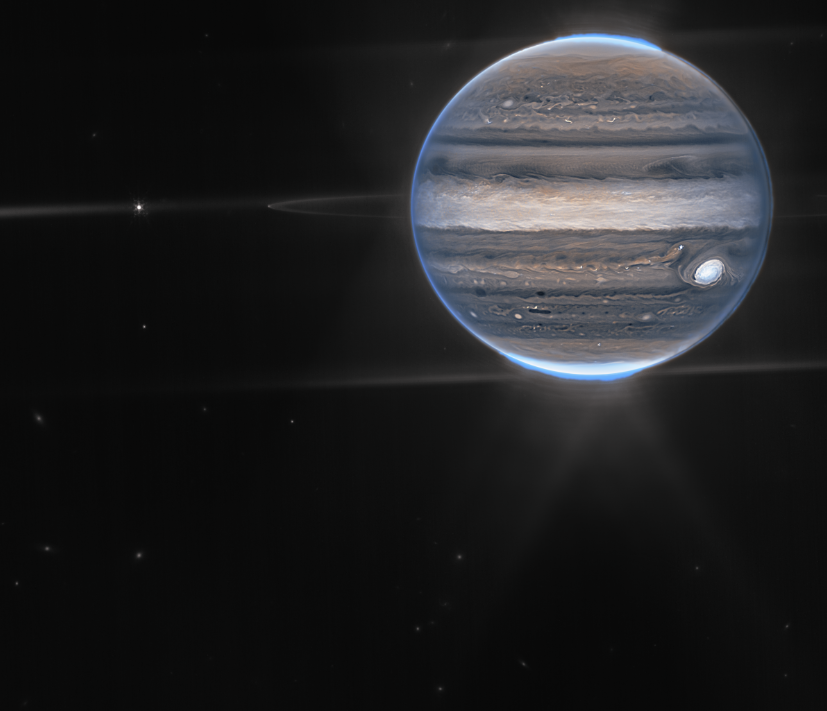 However, we can all forgive a white “red spot” for an image of this quality. Especially when the imaging allows us to see with so much more clarity. Just look at this image of Neptune: 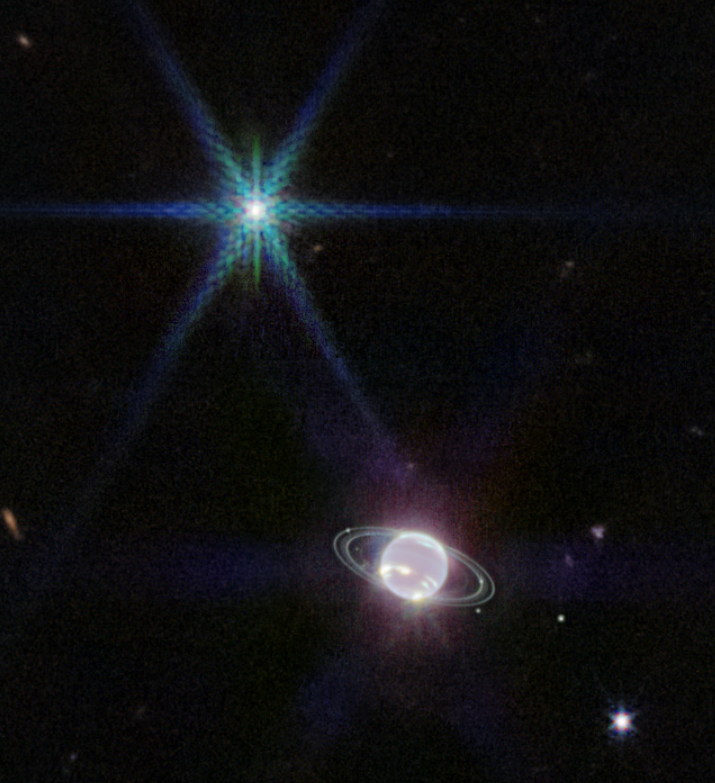 JWTS’s image of Neptune, released in September 2022, is the first image to contain Neptune’s rings since Voyager 2 captured them 33 years ago. JTWS was also able to capture seven of Neptune’s moons, including Triton, which appears as a giant star in the photograph due to its highly reflective icy surface.

1. Near-Infrared Camera (NIRCam): The NIRCam is the primary imager on the JWST, and is responsible for observing young stars forming nearby, stars in galaxies nearby, and very old galaxies forming historically.

2. Near-Infrared Spectrograph (NIRSpec): The NIRSpec was designed by the ESA to disperse light from an object into a spectrum for analysis. This process is used to determine the physical characteristics of objects, such as temperature, chemical makeup, and mass. The NIRSpec is so powerful it can observe up to 100 objects simultaneously.

3. Fine Guidance Sensor (FGS)/Near-Infrared Image and Slitless Spectrograph (NIRISS): The FGS/NIRISS are from the CSA and are used to aim the telescope as precisely as possible. NIRISS additionally has three modes for scanning different wavelength ranges.

4. The Mid-Infrared Instrument (MIRI): The MIRI is responsible for looking at distant redshifting waves that are too long or stretched out for the other three cameras to detect.

Up until this point, most of us thought of Hubble when we thought of space telescopes. However, have no fear: JWST isn’t a replacement for Hubble, but a successor. JWST’s goals are based on what we learned from Hubble and are aimed at improving on Hubble’s limitations.

The difference in the target wavelengths of the two telescopes impacts the objects they are capturing. JWST is designed to go further back in time than Hubble and look at the earliest galaxies and stars. Hubble can only see back a finite amount until things are taken out of its gaze through redshifting and distortion or blockage from gas clouds. As a result, Hubble’s goals were focused on newer stars and planets, while JWST was designed to look specifically at older bodies. 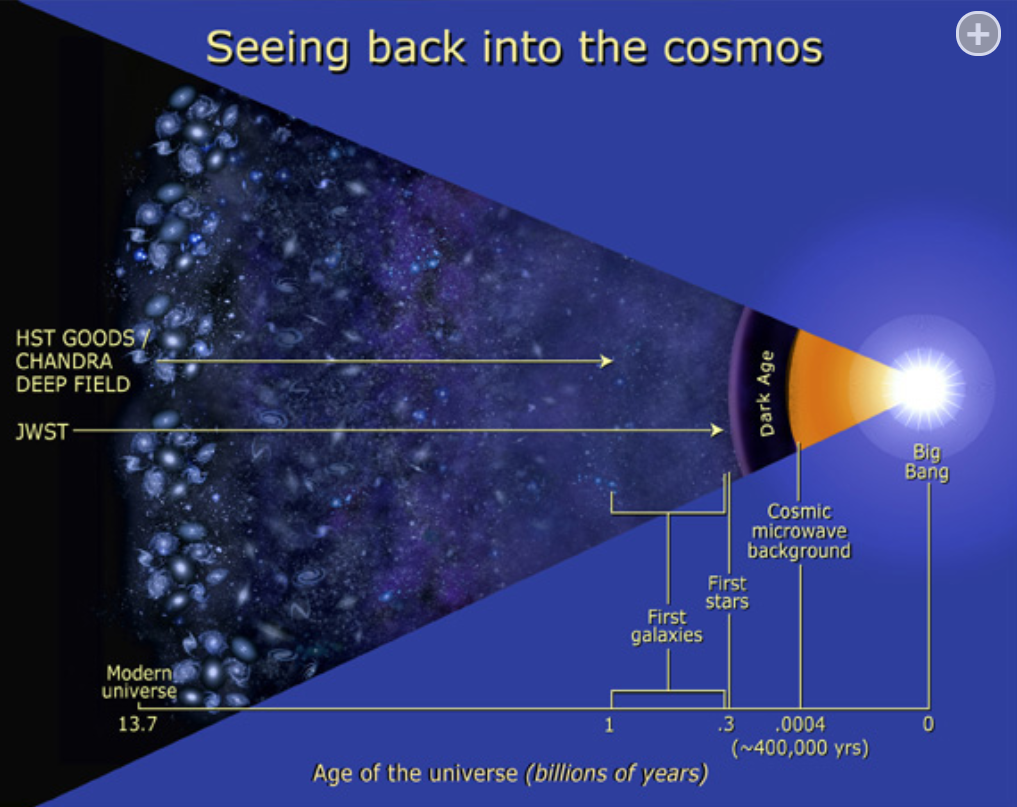 Space is awesome. The JWST telescope is an incredible piece of technology that is continuing to show us just how incredible space is, and how little we truly understand. The next five to ten years will be fascinating to watch, as they will redefine the universe as we know it. If you’re interested in learning more, I encourage you to explore the links below.